I'm Salem Wolfe, your host for this any time blog.

I currently live in a small town called Langdon, said to be "The Good Luck Town”.
It's rural, it's quaint, and even the storefronts look like they are from a neo-far west movie.


What do I like? Give me new things to try, new perspectives, and if you got a flavour that's new and different, I will try it too. Screw vanilla and chocolate! We all got a comfort zone and I try to challenge mine whenever I can and I like to look for trouble when I'm bored.

Some have described me as bubbly, strange, and silly. I’d like to add that I enjoy being challenged, that I will argue until one side has made a perfect point (or both end up crying). I’m that strange breed of introverted-extrovert; I love spending time with people, I don’t mind a good party (as long as the food is great) and I'm okay with speaking or singing in front of a big crowd.
One time, when I was maybe 14, we were stuck in a big line up for a roller coaster in Montréal's theme-park, a lot of us were getting impatient, so I climbed up on top of a cement structure where people could see me, and started cracking jokes to brighten the mood. I’ve always been a bit of a clown and love making people laugh (hopefully along with me). Laughter is the best way to get the edge off!
But I also enjoy not leaving home, to have the house to myself. A good bath and a book. A fireplace and a book. A cat and a book. Husband trying to sleep and a book, while the cat tries to battle with my clip-on lights.
I in my spare time, aside from reading and collecting books, I play video games. I'm a Zelda and Pokemon fan, and a hardcore fan of Tales of Eternia. I've loved Namco's Tales of franchise ever since PlayStation came along.

Spontaneous could be my middle name; I just can’t stand routine. Just saying routine out loud makes me want to throw a tantrum, I don't know why. I get bored easily and if you remember what I said, I'll be looking for trouble then.
I travelled to Germany on a whim in 2009 right after leaving a job with a sexist boss and upper management. I got lucky and met my husband in a small town near Frankfurt. We did Kung Fu classes together. We lived there for a few years until he got an opportunity to come work in Canada. Certain things in Germany weren't to our liking, such as bureaucracy, making the move a welcome opportunity. But let's give the country some love...
Three things I really love about Germany; bath houses, maultaschen and Christmas markets.

Bathhouses are the equivalent of an all-you-can-eat buffet, but with pools, hot tubs and saunas. And you don’t eat them. Okay, not much like a buffet, but you get the idea! We’d pay 13 euros - back then - for a block of 4 hours and if memory serves me right, our favourite place had 2 cold pools outside, one big pool with a tunnel leading outside, two hot tubs, and that’s the public part. The private part (I’m winking at myself there) is a nudist part. That’s right, au naturel, and you get access to the best saunas you will ever experience. Promise. About 6 different dry spas with different temperatures – I can’t stand too hot – and different aromas every few hours, one wet sauna, one hot tub and a few more pools of different temperatures. On top of that (wait there’s more??), you get a special bracelet that looks like a dumb watch which you use to scan your access to the naked part and buy food at the bar. Oh, and you can drink beer there too if you want. The Bretzels are delicious! Then you get dressed, get out and scan your bracelet at the entrance booth, and pay what you owe. This concept needs to exist in Canada, schnell.
I picked up some German but I wouldn’t be able to hold a good conversation. Since employed by a video game company, our working environment was mostly English, and my husband didn’t bother speaking German with me. He was too happy to finally get to speak English with someone! It’s alright, the only people who mind are my in-laws. No Big Deal …until we go visit them again.

We visited a few more neighbouring countries before leaving for Canada. We drove to Italy for our honeymoon, and if you wonder about pizza and pasta being a false cliché or not, it’s not. Not really... Italians do consume both on a daily basis, and that's pretty much all restaurants had to offer as entrees go. One place did have risotto and another had clams. But we had the best pizza in the world in a small town (you’ll notice they pretty much all look the same and they are all, seemingly, located atop a hill.
They had caramelized shallots on top.
BEST PIZZA EVER.

We took the train to Paris and let me tell you, the French know how to make food. If you love cheese and pastries, it’s your dream vacation spot. It was probably January, and this baker was ordering her strawberries for 30 euros a kilogram in the middle of winter. That’s hella expensive and yet her strawberry tarts were, aside from being heavenly, only 3,50 euros. That’s considering quality higher than profit. This kind of mentality is at the heart of a food lover's pride.

We also flew to Scotland, more than once. It’s simply beautiful, and haggis with nips and taters is the equivalent of a homemade Québec tourtière without the pie dough. Scotland also made me discover that beer can be an enjoyable experience. I had a glass of sheepshaggers on tap and it tasted like lychee. But the bottled version was disappointing, the lychees were gone too. Pubs are fun to go to, if there’s a game going on, even better! Doesn’t matter if you like watching sports or not, there’s just a vibe in there that’s so contagious, you gotta cheer with the others! 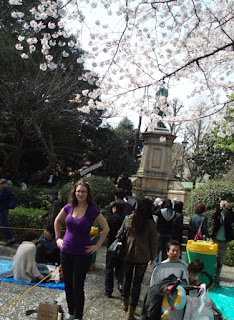 I'll squeeze in that I went to Japan too prior to meeting my husband. Stayed in a charming and friendly guesthouse in Hibarigaoka, Tokyo. Japan is better than all the clichés about them. They're karaoke bars and booths are the stuff of dreams, the food is always delicious, there's too much to see and try in only one month and everybody is helpful.

It was March 2010 that I flew to Japan with 2 goals in mind:
1. Break up with my previous boyfriend.
2. Enjoy Japan like a tourist trying to live as a local
I successfully achieved both and it was for the best.

I speak and read a little bit of Japanese, but it's my French that's better. But that's not a fair comparison since it's my mother tongue. Turns out there's quite a few French words in the German language and a few German words in the Japanese language.

I like that travelling so much has given some interesting experiences and perspective. I write fantasy, sci-fi and YA whenever I can find some time.
Right now, I’m working on a fantasy/sci-fi novel about an alchemist and a magician fighting from inside and outside their mind, and 3 YA short stories about lonely people. I read of a little bit of everything, but I like these genres best. I love research, that's one of my favourite parts about writing. That and daydreaming scenarios. My top 3 my favourite books are The Last Unicorn from Peter S. Beagle, Eiji Yoshikawa’s Musashi because their characters are amazing and the prose is poetic, Anne of Green Gables and the following books by Lucy Maud Montgomery just because Anne is such a relatable character.
Rainbow Rowell is also one of my favourite authors because her characters are so raw, so real, you can feel what they feel, and sometimes it hurts so bad. She writes YA, but I like to call it drama. I don’t think I could pick a favourite book, but I’m quite partial to Fangirl and Carry On. I love the Lord of Rings and as much as I hated Lord of the Flies, it was a fantastic book that perfectly pictured the nature of children left to their own devices.
I still haven’t read 1984; it’s one of my life goals. Let’s hope this last statement didn’t make me lose too many points.

Expect one of my upcoming posts to be about the WWC 2018, a Calgarian writers convention which I attended this month!

Salem Wolfe
Salem has a little too much imagination and needs an outlet for her ramblings, that's why she chose writing. She studied arts, literature and mythology in Cegep which is sort of like university but not quite.